Yesterday for Wordless Wednesday, we were at Morrill Hall – specifically in the Discovery Center downstairs.  My kids could stay in that room for a VERY long time.  And we were probably there at least an hour and did not even begin to see half of what is contained in that room. This room is crammed with so much to see and do that I decided to use pictures to show, then adding captions to tell what you are seeing, rather than including lots of text.  Since my pictures were definitely a bit cryptic yesterday, I will start by including a complete picture of the four close-ups featured yesterday. 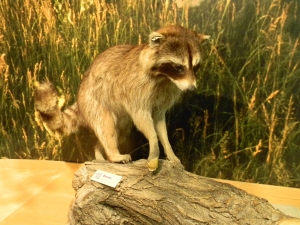 Cuter than they probably are in real life!

Reminds me of a Georgia O’Keefe photograph

Am fine with seeing this animal mounted rather than live and in person!

Their “tree” demonstrates the different seasons and also explains about different animals.  You can see the puppet show/stage in the background.

You can take down a box, then illustrate what you see!  Great for those who have an artistic eye.

The remaining pictures were actually taken by my son, Zechariah.  He has decided that he may want to be a photographer someday.  So, he practiced at the museum and snapped 234 shots (not including the ones he deleted to make room on the SD card for more pictures).  He wanted me to attach them in a file for you, but I decided instead that I would just include a few favorites! 🙂  (You’re welcome!)

You can pretend to “dig” for dinosaurs with Ashfall (located in Northern Nebraska) pictured in the background).

Both “animals” for crawling under, not climbing on top!

Collections to play with, and you can see just a glimpse of the puzzles and books underneath.

Collections to observe (strangely reminiscent of a project I completed in 4th grade long ago!)

Just outside the door – the closest I ever want to get to one of these!

If you never made it to Morrill Hall, now is your chance.  Admission is FREE tonight and next Thursday from 4:30-8:00.  For active military members, this is also a Blue Star Museum – free admission still for a few more weeks.  The rest of the museum also happens to be fabulous.  (Although I will say from a personal viewpoint, I do not completely agree with some of their evolutionary conclusions, but …) I will write more blog posts in the future on some of Morrill Hall’s additional areas. 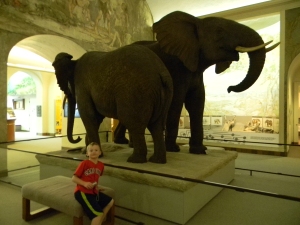 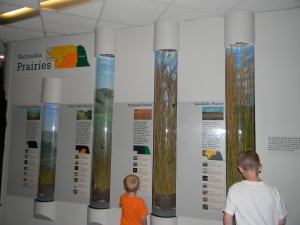 Somehow my oldest only made it into this picture.  Another great area in the museum for another day!

Place at a Glance