Place Behind the Places

How places come to be is always interesting to me.  Omaha’s Henry Doorly Zoo definitely has a history!  First there was a park formed by the city of Omaha through condemnation proceedings on area properties in 1894.  Over 100 hilly wooded acres were set aside for what officially became Riverview Park Zoo.  In a short span of only four years, 120 animals were park residents. 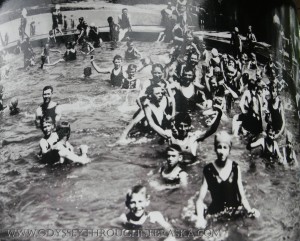 In 1916, the park added another feature as the Riverview Pool quickly became a place for refreshment in Omaha.   For about 34 years, the pool was open to patrons.  Then the polio epidemic began and going out in public areas scared families away.  Covered over in 1944, the pool was almost forgotten. 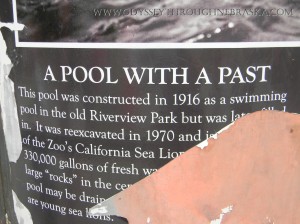 Unfortunately the story behind the pool is gradually fading away.  Hopefully they will fix this, so that patrons can continue to appreciate the past life of the pool.

Around 1970 the buried pool was given a new life.  Mentioning to the caretaker his plans for a sea lion pool, the current Henry Doorly Zoo director was startled to learn a bit of history that had been set aside.  Rather than building a new swimming area, the caretaker suggested that he simply unearth the pool that was already there.  This once enjoyed pool became a new home for the sea lions. 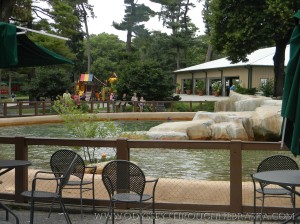 Despite what my children think, I was not around when this happened.  While I do remember loving watching the sea lions frolic and play in the pool when I was a child, this process was before my time.  Exactly how much of the original pool remains is a bit of a mystery, but the pools are definitely on the same site.  I appreciate the fact that they are trying to preserve parts of Omaha history.

A special thank you to Omaha’s Henry Doorly Zoo for their assistance in this story.  All other references that I used can be clicked on above.  To learn more about early Omaha parks, you can read the Nebraska Historical Society’s PDF on the History of Omaha Parks & Rec.  Sometime later this summer I will be doing a longer feature post on  Omaha’s Henry Doorly Zoo.  This zoo is definitely one of our family’s favorite places to visit!

P.S. I have recently been honored to join a Midwest Travel Bloggers Group.  The topic of the month just happened to be zoos.  To learn about more great zoos across the Midwest United States, here is what you need to do.  First, read this excellent post about the Walking Tourist’s Camel Ride at the Kansas City Zoo.  At the bottom, links are included to all of the other June posts about zoos.  This is great way to find out about other wonderful travel bloggers, as well other zoos around this area of the United States!

A element of nature that influenced the place, be it animal or geographical feature …

Antelope: Guessing what this county is named for is easy.  Guessing why may not be.  Evidently an antelope kindly provided a meal for Leander Gerrard (of Platte County) and the company that he was with.  They shot the antelope while on the trail of Indians.

Buffalo: In earlier times, buffalo herds used this land as a feeding ground.

Cedar: The trees that were in the region.  (This is the county my grandparents used to live in – visited this great county often through the years!)

Garden: They longed for this county to be the “garden spot of  the west.”   This has only been a separate county since 1909.

I am not sure that it is garden-like, but it is pretty ..

Keya Paha County: This county is named for a river that can be found in the Northeast part of the county.  In Sioux, the word ke’-ya means turtle and pa-ha’ means hill.  River means wa-kpi’ in the Sioux language, but that part did not make it into the county name.

Loup: Named for the Pawnee Loup or Loup River that flows through the county.

Nemaha: Named for the Nemaha River.  In the Oto language, Ni means water, and Maha means miry.  Miry means swampy.  (This was a new word to me or maybe I always spelled the word another way?)

Platte: The French translation of the Indian word meaning flat.  First called “Loup” and only was the eastern part of today’s modern county.  Monroe was the western half that was eventually absorbed into the Platte County.

Red Willow: This county should technically be named “Red Dogwood” because that is the correct translation of the Sioux word “Chan shasha Wakpala.”  This plentiful shrub grew along the banks of the creek.

Rock: Rocky soil in this location.  Although interestingly enough, this is also one of the counties where the Niobrara flows through …

Saline:  For the supposed salt deposits in the area.    This ended up being false.  The interesting part of the story – the fight over the location of the county seat and the keeping of records.  You can read more on Saline County’s historical page.

Scotts Bluff: The noted landmark in the area influenced the name of the county.  (Of course, there was a person behind the name of the bluff: area trapper Hiram Scott who died at the base).

Valley: For the mostly valleys found in this county that is in between the higher table lands of the North Loup Valley that is around this county.

Only five Nebraska counties have to do with towns or counties from other regions.  I think if I were to do a study on Nebraska towns, I think many Nebraska municipalities were  named for places.  But while I may look at the names of a few towns, I will probably never have time to identify all of these.  Perkey’s Nebraska Place Names would be a great reference, but that is way more extensive than I want to go!

Banner This is not exactly after a place but more the place they wanted to be known for.  They hoped to be the “banner” county of the state.  The citizens were enthusiastic when this new county split off from Cheyenne.  Deputy Secretary of the Nebraska Department of Agriculture was big into helping promote this idea back in 1888.  The county does border Wyoming and also fairly close to Colorado.  They do have a Banner County Historical Museum.

Frontier: The Frontier region of a sparse settlement.  (I tried to find out more – the historical links were down on their county site!) 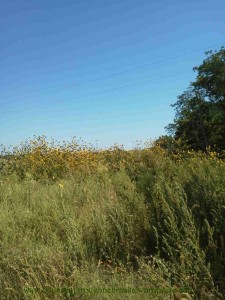 Madison: While this county may have named for former President Madison, some believe the Madison County, Wisconsin, where many of the German settlers had relocated from, is the real inspiration.  Interestingly enough while the city of Madison still exists, that county does not.  I would think that county in Wisconsin was probably named for the President, so he must be in there somewhere.  I could not verify that though …