Flashback Friday: See you at the Sokol (cultural gymnastics in Nebraska)

Having moved several times in my lifetime, I know that there are certain things that I would never trust to be packed by “professionals.”  Precious items like the outfits my children wore home from the hospital. Notes and cards from my husband.  My grandmother’s inherited fragile china.  I would want to guarantee that they made the transition with me and were wrapped carefully.  While moving companies can promise to purchase new for what is broken, some items are simply irreplaceable.  (And if airlines can lose luggage, why can’t a moving van?)

When immigrants came to this prairie land, many had few material possessions.  So, instead much of what they transferred was in the form of traditions.  Which is why the United States is a wonderful hodge podge of cultural ceremonies.

Those coming from Bohemia were no exception.  This small kingdom, that eventually would become Czechoslovakia/ Czech Republic,  was a part of the Austrian empire in the 1800’s, the time period when many searched out a new place to define home.  Although they wanted to leave the financial and political oppression behind, they did not lose their sense of being Czech.

Just three years after the Sokol institution began in 1862 in Prague, one could find the program in Missouri.  Just over a decade later, a Sokol could be found in Crete (soon expanding to Wilber as well).  This secular movement would end up being the only Czech institution to continue in the United States. 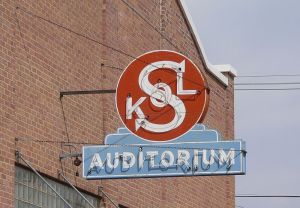 According to Oxford Dictionaries.com, the word sokol describes a Slavic gymnastic society aiming to promote a communal spirit and physical fitness, originating in Prague in 1862. In Czech, the word sokol means falcon.  As this majestic bird is quick, brave and capable of persevering, those founding the sokol knew this image was what they wanted their organization to portray.  Beyond just physical prowess, the founders were convinced that intellect and morals were also a component of a strong individual.  Typically, a sokol group completes exercise movements on an extensive level. 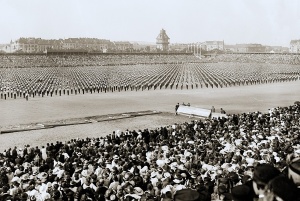 A Sokol Slet (gathering) from 1920 in Prague

Despite bringing the organization from their motherland, a stark contrast existed between homeland Sokol and American Sokol.  In Bohemia, the citzens were wanting to maintain their own national sense of pride.  The American Sokols had a varied focus.  They wanted to develop a strong community – a way to keep their Czech heritage and culture alive.  In addition to bodily skills, such as calisthenics and movement, other components of the Czech culture were conveyed.  Lessons in Czech literature, culture, history and language.

I first heard of Sokol when I borrowed the Czech trunk (from the Nebraska History Museum) which contained a video demonstrating historical sokol (more on that tomorrow!)  Although I tried to find a similar video online, I could only find “modern” demonstrations.  (There are quite a few videos on YouTube, but many of them were done by shaky camera holders.)  But these several videos will at least give you an idea of what part of sokol represented.  Think marching band formations doing gymnastics instead of playing instruments.

Since Sokol still exists across the United States, this topic almost does not qualify for being a “flashback.”   But since the role of Sokol has greatly diminished (including no longer existing in Wilber) and because this organization definitely has historical origins, I decided that Sokol should qualify.  The only Sokol location in Nebraska is in  Crete, and you can visit the American Sokol site to learn more about their United States national organization.

Note: To do research for this article, I used various encyclopedia sites online, but I also consulted this article: Nebraska History PDF “Sokol Pavilion”

Stories From Across the Ocean – Bringing Czech Culture to Nebraska

My favorite way to teach about history is to read well-written picture books.  Usually these books are in story form with beautiful illustrations, and they give a glimpse of what used to be.  A snapshot of the moments gone by.

Peter Sis is an author/illustrator that I discovered when we were “traveling” around the world.  His illustrations are full of detail and complexity – they add so much to the tales that he is telling.  He brings his homeland of Czechoslovakia to life by sharing stories of his childhood.  His books are not necessarily happy (after all as a child, he lived through an oppressive time of communism), but they are real.

I do have to be honest and say that I cannot wholeheartedly recommend every title that he has completed as we seem to have different world views.  And even though he is writing for children, his titles do need to be previewed as some of his folklore is a bit intense.  But even if you cannot quite appreciate some of his stories, you will always be delighted with his illustrations.

Note: the book covers were copied directly from Amazon with links provided, so that you can purchase the books if you so choose.  The titles also might be available at your local library.

Here are the two Peter Sis books with a Czechoslovakia theme …

The Wall: Growing Up Behind the Iron Curtain

Two other books of his that we enjoyed: The Starry Messenger (about Galileo) and Follow the Dream (about Columbus)

My Birthday to Remember in the Town of Wilber, Nebraska

Place at a Glance

Did you know that the 2013 Wilber National Czech Festival begins this Thursday August 1st?  So, all week I will be featuring stories about Czechs and their cultural contributions to Nebraska. 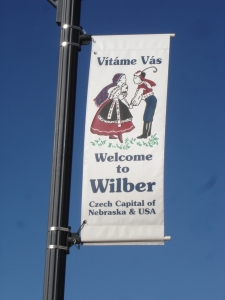 In 2010-2011, our family traveled around the globe to over 40 countries.  If you have gathered from previous entries that we are a homeschool family, you would know that most of our exploring took place in our kitchen and in our living room.  Since I I wanted to immerse my family in the countries we had chosen to study, we learned by  coloring famous places (like Machu Pichu), ate a meal for each country (like lingonberry meatballs and oostakaka), read folklore (like Grimm’s fairy tales) and enjoyed finding out about the world.  As I picked the countries to emphasize on each continent, I knew that I definitely wanted to make a stop in each country that represented our personal cultural heritage. 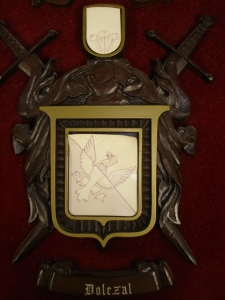 Since some of my husband’s relatives had emigrated from Czechoslovakia, studying the Czech Republic was a way that we could celebrate part of my  heritage.  The town of Wilber, Nebraska celebrates Czech Days every August.  so that summer I called the Chamber of Commerce to inquire about the festival.  When the lady discovered that our kids were 1,3,5 and 7 at the time, she suggested that we come spend a full day in Wilber later in the fall, instead of coming to Czech days when the town is a bit hectic for little kids.  So we decided to venture to Wilber when we would be actually studying the Czech Republic, and that happened to be the week of my birthday. 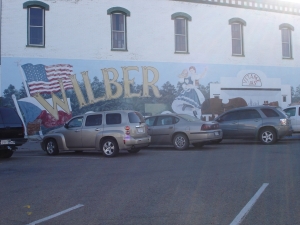 My birthday was on a Wednesday that week – my Dad’s day out of the office.  So, I convinced my husband to take that day off as well, and we invited both of our sets of parents to join us for “A Day to Remember in Wilber”.  A beautifully sunny, comfortably cool, fall day awaited us. 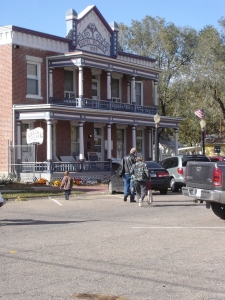 Our day began with breakfast at the beautiful 1895 Hotel Wilber.   Starting out your morning with fresh kolaches is always a good thing!  (More on these tasty treats later this week!)  Then we proceeded to take a walking tour of the town – learning more about Wilber than we ever thought that we would know.  The town is really quite lovely with several different businesses (and bakeries!)  Our guide for the day even wore her festive Czech dress. 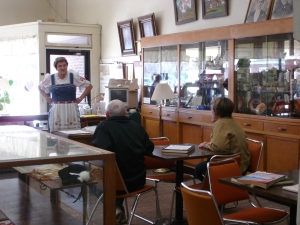 After walking around town for the morning.we went back to Hotel Wilber for a delicious dinner.  Since they did not happen to have any guests in the middle of the week, we also were able to take a tour of the hotel.

One of my favorite Hotel Wilber rooms.

After our hotel tour, we went to another place or two, then ended up at the Czech Museum.  For a smaller community, they have amassed a wonderful collection of historical treasures.  Several “rooms” were set up to display the items in historical context. 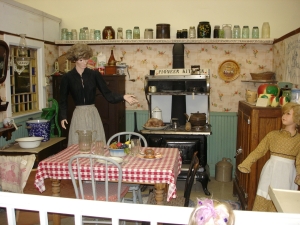 I could have spent a lot more time in the museum, but when you are traveling with littler ones at a certain point you just know that the experience needs to end.  So, about mid-afternoon, our “day” in Wilber came to a close.  What I enjoyed the most was getting to enjoy a leisurely day with those I loved the most!  (And a later supper that included my sister & brother completed that togetherness!)  Since we had planned on spending the day there, we were not on a tight schedule, so my birthday unfolded in a charming way (and turned out to be one of my favorite birthdays ever!)  I hope we can repeat this Wilber outing when we “go” around the world again a few years. 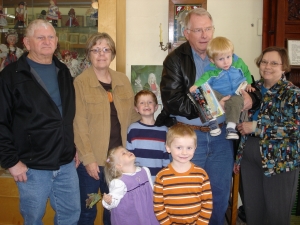 P.S. As you may have noticed in the information in the above box, they do still give tours.  You can visit the Wilber Chamber of Commerce website for more details.  The majority of their tours are for adults, which is why I mentioned that the childrens’ prices for the meals & everything might be slightly negotiable, depending on the size and eating capabilities of your child! 🙂