Playing Around at Mahoney State Park: The Indoor Activity Center

Our children have their birthdays in a span of less than a half year.  This year we decided not to have individual parties but instead to let each of our children bring a friend along to play at the Mahoney State Park Indoor Activity Center (Playground). 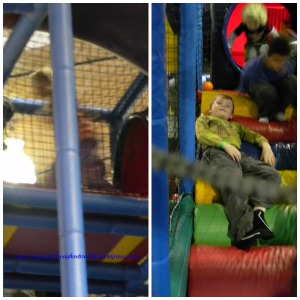 The highs and lows of our experience! 🙂

The kids loved  the experience, but as for the adults, the room got a little loud.  Notice again the ear plug recommendation.  If I had to do it all over, I would try for a weekday time with the possibility of less people.  Of course, the activity center is not always open during winter weekdays. 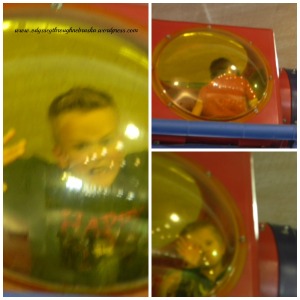 Life in a bubble …

The interesting thing was that the kids got rather warm while playing despite the fact that it was freezing outside.  One of the kids knew this from a previous experience and brought along shorts.  The rest of the kids pushed up sleeves.  We had not intended to buy snacks, but suddenly popsicles seemed refreshing to the kids.

Other snack foods are also available.  Could be worth the price, especially if you wanted to stay and play the day away.

Netting a victory for fun!

This was a great way for the kids to burn off lots of energy.  Since the structure is so large and full of so many possibilities, the 5 year olds and 11 year old had equal opportunities to enjoy themselves.

The favorite part of the day for my kids was getting to experience the place with their friends rather than just with each other (our normal protocol).  You can rent a party room area where you can serve even outside food.  That costs $60 for 2 hours.  We chose to feed the kids lunch in advance.  Our outing cost $20, plus $10 for the popsicles.  Since really this was the cost for 4 parties, I feel like that $7.50 per party is a pretty good deal.  We may combine parties again next year! 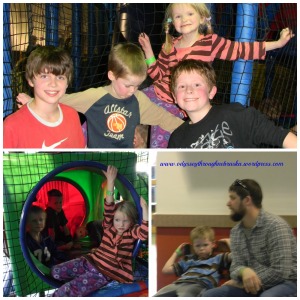 Time together was the highlight.  Fun to see all of the kids interacting with each other and not just with the friend that he/she specifically brought along.

Okay, so we still have Olympic fever around here.  At least the kids and I do – I think my patient husband has put up with more slaloms, spins and ski splits than he would like. 🙂  I think I enjoy watching almost all of the sports, but there are many that I would never want to actually attempt.  But I would love to take my kids for bobsled ride – that is the one Olympic sport, possibly apart from curling, that seems a bit more possible, at least on a smaller scale.  But I am pretty sure that no one would entrust their thousands of dollars machines to us.  So, I settled for the next best thing: tobogganing!

Well, maybe tobogganing is a bit of an exaggeration since we used sleds, but still such a fun experience.  Having gone official toboggan runs complete with tow ropes up in Minnesota as a college student, I much prefer this way of just walking up. 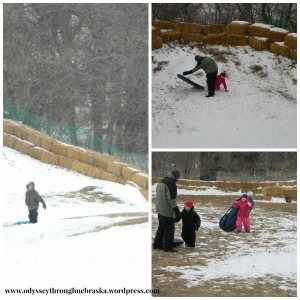 The hills were just steep enough to get you out of breath without being so daunting that you are unable to make it to the top without falling a half-dozen times.    The paths were starting to show a bit of brown grass, but thankfully the runs had enough snow where you did not get stuck.

I captured some pictures of the adventurers, then safely stowed my camera away, so that I could join in the fun.  While we did some other fun activities that day, this was definitely my favorite event.  I think my husband and the kids would agree.  We will definitely be returning – a fun AND free event – a year-round park permit is the only real expense.  And a sled, but those can be used other places too!

Since Mahoney State Park is located halfway between Lincoln and Omaha, they are an ideal location.  I could not find the official hours of the toboggan runs, but I do know that they do have outdoor lights.  I would imagine that they are open a few hours into the nighttime hours. They also have a snow machine that they can operate, but your best bet is going a day or two after a big snow.  We may still have a few of those left since February still seems to be the middle of winter in Nebraska.  Happy sledding!

P.S. Mahoney just happens to have an ice skating rink – $2 to get into the activity center and $3 more for skate rental.  Not a bad deal!

Mahoney Melodrama: Ending Soon at a Theater Near You

I thought I had posted this last night – evidently I did not.  So much for my Wednesday being wordless.  🙂  I will tell more about that place tomorrow, but for today here is yesterday’s post.

One event that was included at our fall church women’s retreat was attending the melodrama presentation at Mahoney State Park.  I was bit skeptical, but the event ended up being just the ticket to start our relaxing and reflective time away.  The play was well-written, but I know that the actors were the true shining stars.

While our group did not throw any popcorn, watching many others try to “hit” the villain (located front and center) with the crunchy white missiles was certainly amusing.  And evidently sometimes the crowd throws dollars up on stage – also quite funny to watch the actors put their feet down on top of the bills until they could pocket the money.  My favorite character was the ditzy cheerleader – her enthusiastic chants added fun to the storyline.  (Plus the fact that she ended up being my longtime friend’s sister was a fun bonus!)

The play would be appropriate for audiences of all ages.  I was wishing that we could have made it up there as a family to watch – I would have gladly watched the show again.  But with busy Sundays and 8:00 performance times on Friday and Saturday, that is a bit late for my crew so far.  (Hopefully next year, this will be a family event!)

I meant to post this information right away to give everyone plenty of time to go see the show.  Instead I got caught up in Omaha and forgot.  So, this is the last week-end of performances.   Tickets are $7 per adult and $5 children age 12 and under.  Family pricing is also available.  Besides their Friday and Saturday evening performances, they do have a 3:00 matinee this Sunday.   If you do not have any plans, I would highly recommend the experience.   In case you miss this melodrama, they do several different performances throughout the year.  While some of the plays might be more family friendly than others, I am glad that they do put on high quality plays that are also budget friendly!